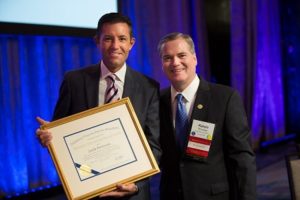 On September 12, 2016 President KEVIN RHODES presented the Distinguished Service Award to LOUIS FOREMAN, founder and Chief Executive of Enventys, for his extraordinary leadership and dedication to IPO and the IPO Education Foundation. Louis is currently serving his second term as IPO Education Foundation President. Under Foreman’s leadership, the Foundation has developed the Girl Scout IP Patch, created the “Innovator Insights” interview series featuring inventors’ and other IP stakeholders’ views on the patent system, and published the first edition of Intellectual Property Law for Dummies. He is also a member of the IPO Board of Directors and has briefed members of Congress on legislation related to the U.S. Patent system and its impact on independent inventors. Rhodes expressed IPO’s gratitude to Foreman for his exceptional service and volunteerism.

This site uses Akismet to reduce spam. Learn how your comment data is processed.